A Fairy Sighting at Ilkley Wells (circa 1815)

The following fairy encounter was written by Charles C. Smith and appeared in  “The Folklore Record of 1878,” which was published by The Folklore Society in 1878.  Smith writes of a fairy encounter that William Butterfield, the keeper of  Ilkley Wells in West Yorkshire, England experienced around 1815, as told to him by a local man. This man described Butterfield as  “a good sort of a man, honest, truthful, and steady, and as respectable a fellow as you could find here and there”.

Here’s the story as Smith recorded it:

“William Butterfield…always opened the door first thing in the morning, and he did this without ever noticing anything out of the common until one beautiful, quiet, midsummer morning. As he ascended the brow of the hill he noticed rather particularly how the birds sang so sweetly, and cheerily, and vociferously, making the valley echo with the music of their voices. And in thinking it over afterwards he remembered noticing them, and considered this sign attributable to the after incident.”

“As he drew near the wells he took out of his pocket the massive iron key, and placed it in the lock; but there was something “canny’ about it, and instead of the key lifting the lever it only turned round and round in the lock. He drew the key back to see that it was alright, and declared, “It was the same that he had on the previous night hung up behind his own door down at home.”

“Then he endeavored to push the door open, and no sooner did he push it slightly ajar than it was as quickly pushed back again. At last, with one supreme effort, he forced it perfectly open, and back it flew with a great bang! Then ‘whirr, whirr, whirr’, such a noise and sight! All over the water and dipping into it was a lot of little creatures, all dressed in green from head to foot, none of them more than eighteen inches high, and making a chatter and jabber thoroughly unintelligible. They seemed to be taking a bath, only they bathed with all their clothes on.” 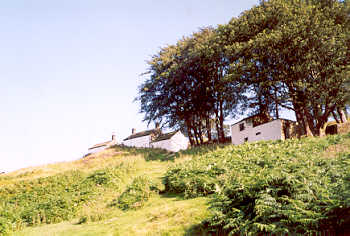 “Soon, however, one or two of them began to make off, bounding over the walls like squirrels. Finding they were all making ready for decamping, and wanting to have a word with them, he
shouted at the top of his voice—indeed, he declared afterwards, he couldn’t find anything else to say or do—”Hallo there!” Then away the whole tribe went, helter skelter, toppling and tumbling, heads over heels, heels over heads, and all the while making a noise not unlike a disturbed nest of young partridges.”

“The sight was so unusual that he declared he either couldn’t or daren’t attempt to rush after them. He stood as still and confounded, he said, as old Jeremiah Lister down there at Wheatley did, half a century previous, when a witch from Ilkley put an ash riddle upon the side of the River Wharfe, and sailed across in it to where he was standing.”

“When the well had got quite clear of these strange beings he ran to the door and looked to see where they had fled, but nothing was to be seen. He ran back into the bath to see if they had left anything behind; but there was nothing; the water lay still and clear just as he had left it the previous night. He thought they might perhaps have left some of their clothing behind in their haste, but he could find none, and so he gave up looking, and commenced his usual routine of preparing the baths; not, however, without trotting to the door once or twice to see if they might be coming back; but he saw them no more.”

“The whole affair appeared so odd that it was a long time before Butterfield told anybody about it, and besides, he thought their appearance might be a sign of bad luck either to his wife or ‘bairn’. However, after some time had passed, and nothing had come wrong, indeed he had rather prospered than otherwise, he told his wife, and of course she told it to other wives, until it became widely known, and by the time Butterfield got to be an old man, and people ceased to believe such things, he told it to very many. Some believed it and some didn’t, but few thought William Butterfield didn’t believe it. I may add that William Butterfield died on the 18th July, 1844, aged 69 years.”