A Fairy Sighting in Nevada…

While camping in the Wheeler Pass / Spring Mountain, Nevada area,  Teri brought along an “enchanted” fairy pendant that she had purchased from Ebay.  Teri believes that this pendant is truly an enchanted object.  According to her story, she called the fairy, whose name is Arianna,  while she was up at the camp site and the fairy responded by showing herself. 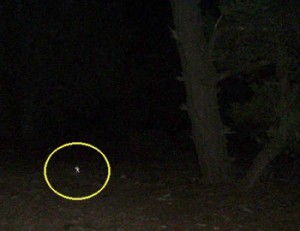 Is this a fairy come to visit?

The photo that was taken right after she summoned the fairy is definitely thought provoking.  As you can see in the first photo (left, in the circled area),  there is a small but very bright object clearly visible.  According to Teri, there were no fires in the area and no flash was used when taking the photo. 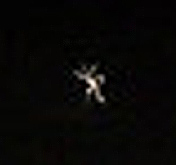 An enlargement of the photo (below, left) is even more intriguing.  Even though it is blurry, you can definitely see what appears to be a small, luminous figure. This does not appear to be a moth or other insect because this object was emitting its own light and most insects don’t do that.  One insect that does emit it’s own light is a firefly/lightening bug but they only emit light from their lower abdomen and are shaped like a beetle (see image below) which wouldn’t match the image above.

There were other photos taken during this camping trip that showed lots of orbs which you can see here if you are interested.

Again, these photos were taken without flash so it’s extremely unlikely that the fairy picture and the orbs are just dust particles (which would have been something to consider if a flash had been used).

Is this proof that a fairy appeared when summoned?  It’s a very impressive photo taken under great conditions but it’s always hard to be 100% certain.  What do you think???