The Fairy Flag of Dunvegan 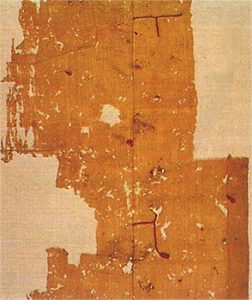 The Fairy Flag of Dunvegan

One of the most fascinating items you will find on display at Dunvegan Castle is The Fairy Flag of Dunvegan. The castle, located on the Isle of Skye, has been the stronghold of the Chiefs of MacLeod for nearly 800 years.  The MacLeods consider the Fairy Flag to be  a gift from the fairies and the most treasured possession of their Clan. Is it a true fairy relic?  Many people think so but there are differing theories about the flag’s origins. Here’s one theory, according to Wikipedia:

“…an early clan chieftan spent some time in the fairy realm. In his time there, he fell in love with the daughter of the fairy king, and they were married. Clan duty called, and he and his bride returned to the mortal realm. However, the fairy princess could only live in there for 7 years. Towards the end of this time, she gave birth to a baby boy, whom she tearfully left behind with the chief. Just before crossing over the fairy bridge back into her world, she begged that the baby never be left alone, as the sound of his crying would be too much for her to bear. That night, the clan had a feast to distract the chief from his grief. As the MacLeods are famous for their piping and dancing, the nursemaid in charge of the baby sneaked away from the nursery to join the party.  When she was discovered, the chief immediately ran up to his son, only to find his fairy wife already there, singing the child back to sleep. When the chief entered the room, the fairy vanished, but left behind a blanket on their son, which became the Fairy Flag. The song she was singing is still sung within the clan, known either as the Dunvegan Lullaby or the Fairy Lullaby.”

Another persistent theory says the flag was acquired during the Crusades  and was a consecrated banner of the Knights Templars but experts have dated the flag between the 4th and 7th centuries A.D which is at least 400 years before the First Crusade.

Yet another theory makes a case for this flag being the same one carried by  King Harald Hardrada of Norway and dubbed “Land-Waster” when he invaded England in 1066.

All in all, most Highlanders believe, regardless of the details, that long ago, the flag was a gift from a fairy maiden to a MacLeod Chief.  As the legend goes, this fairy maiden promised the MacLeod Chief that on three–and only three–occasions, when he or his clan were in danger, he might wave the flag  and be saved  by summoning a fairy army.

The flag was waved twice during in the Middle Ages, so there is only one wave left.  The first time, the MacLeods were greatly outnumbered in battle with the MacDonalds and, at the exact moment that the chief waved the Fairy Flag, the battle turned in favor of the MacLeods. The second time,  the clan’s cattle were dying of some devastating disease and the Chief summoned the fairy armies, who magically restored the cattle to health and saved the MacLeods from starvation.

During World War II, the 28th Chief, Dame Flora MacLeod of MacLeod, offered to wave the Fairy Flag over the cliffs of Dover should the Germans look like they would be victorious.   She also cut off pieces of the flag for soldiers during this time to keep them safe and the results of that can clearly be seen in the photo above.

I  would really love to see this flag in person and see if it has a feeling of magic about it.  What do you think?  Is this flag a true gift from the fairies?