Although the hoax involving the Cottingley Fairies Photos, circa 1920, is well known, many are unaware that one of the girls involved insisted that the 5th photo was genuine.  As you will see in the  2009 video from The Antiques Roadshow below, Frances Griffiths admitted to the deception in the 1980s, along with her cousin Elsie Wright, but she always, to her dying day, said that the 5th photo was the real deal.

In photos 1-4, the girls both revealed that they used cut-out artwork from Elsie and stuck them in the ground with hat pins.  When you look at them now, that does seem pretty obvious.  However, the last photo seems to have a different quality than the previous four and there are some hidden faces in that photo as well.

Here is a copy of the 5th Cottingley Fairy Photo so you can get a better look at it.  Frances claims that the girls were not prepared (with cut-out images of fairies) prior to taking this photo so she looked around, saw some fairies making a sort of nest and sunbathing, aimed her camera and took the photo. 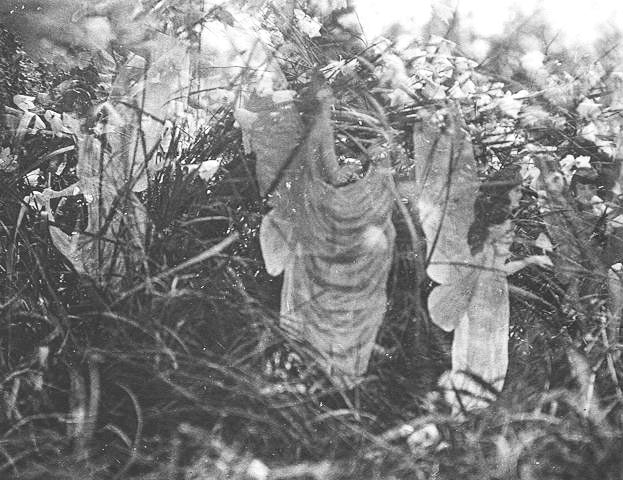 It’s fascinating, but I can’t say that I am 100% convinced as much as  I want to be! Still, it is certainly intriguing to think about.  If you look closely, you will see some faces peeking through on the right side of the photos and bottom right below the fairy’s dress.

Interestingly, in the 1980’s, Ronnie Bennett, a forester in Cottingley Woods, came forward with a fairy encounter he had while working in the Cottingley Estate Woods:

When they showed themselves about nine years ago there was a slight drizzle around. I saw three fairies in the woods and I have never seen them since. They were just about ten inches tall and just stared at me. There is no way the Cottingley Fairies is a hoax.

For those who don’t know the entire story of the Cottingley Fairies, here are links to more information: