Three hours northeast of Bangkok, Thailand, there have been sightings of the Naree Pon, a fairy-like creature that is said to be both plant and animal. Not being taller than three feet, the Naree Pon have been described as having beautiful female bodies and a sort of organic complexion to help them camouflage into the forest, hence being called the Thai Flower Pod Women.

There is a Buddhist legend that I have come across that explains the Naree Pon as beautiful creatures that would try to distract Buddha from meditation in the daytime, then would hide in the trees after night fall. It is also believed that the Buddhist God Indra planted about 16 Naree Pon trees in the Himapan Forest to protect Prince Vessandara, who was Buddha in an earlier incarnation.

These legends are based on the belief that the Naree Pon grew as fruit on trees. Within four days, they would fall from the tree and become alive and active but by the weeks end, they would wither into a small carcass, small enough to hold in your hand. What makes this story believable to me is that there are a couple of withered Naree Pons on display at a temple outside of Bangkok. At first, they seem to resemble a mummified fetus but, on closer inspection, you can see that they have unusually long arms and some plant like structure on their heads.

I recently saw an episode of  Syfy’s Destination Truth where they set out to prove the Naree Pon’s existence after hearing about the disappearances of local villagers, who also went out looking for them. Even though they bought the Naree Pon’s favorite fruit at a market, they didn’t manage to find any physical evidence of their existence, which happens all too often on their show. 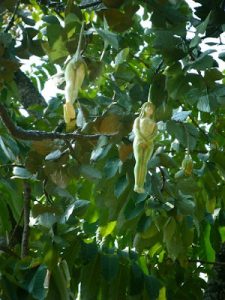 We are not quite sure if we believe the Naree Pon legend completely because there isn’t much information about them,  but we  definitely  think this is an interesting story or legend. If you happen to be searching this topic further and find photos of Naree Pon figurines hanging in trees like the photo on the left, we believe this is fake. However, the withered Naree Pons shown in the temple are definitely worth looking into and have not been disproved yet to date.

To see more of the Naree Pon on display, you can view the YouTube video below.