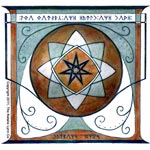 One of the first things the Elves of Fyn will tell you is that humans, as a whole, must learn to respect nature and take better care of the earth before it is too late.  Unfortunately for them, what we do to the earth in our world also affects them deeply in their world and they are unwavering in their efforts to communicate and raise awareness in order to heal the earth.

Not everyone in the faery realm thinks awareness is the best course of action.  There are many groups (or races or countries) that think destroying humanity would be the best and fastest way to save the earth. The Elves of Fyn, clearly on the side of working with humans, have united with seven other groups or nations to form the Group of Eight, or The Eight as they are often called, to work together to help humanity heal the earth.  The Elves of Fyn have said that they want to raise environmental awareness but they also want to help humans become more empowered so that they can more easily achieve this goal.  That is why they are giving us information about their world and their magic.

Much of what they do is shrouded in mist and mystery but I have noticed, and maybe you have too, that there are lots of fairy festivals and conventions and a lot more talk about fairies being real and fairies communicating right now.  Often the messages that people receive seem to relate to nature and the environment.  I think that’s The Eight at work.

To a certain extent, the faerie world mirrors our world geographically and Fyn is where Denmark and parts of Germany would be in our world.  Fyn is a very ancient and well established monarchy going back thousands of years.

Elves are just one of many races that populate their world and we will be talking more about the different types of faery in a blog  post.  Here’s what the Elves of Fyn have to say about their kind:  “The Elves of Fyn aren’t the ‘little people’ that humans think of when they hear that word.  We are as tall as humans, maybe a little slighter in stature but with a bit more grace, agility and balance than humans.  We are not necessarily jovial like Santa’s Elves!”

The elves seem to be more free spirited than humans and aren’t as conservative socially.  They don’t cast others out of their society because of their beliefs or preferences.  They respect and live close to nature, living in a technology free environment similar to medieval times.  They are proud of their heritage and show it with banners and flags and love to celebrate often.