Skip to content
Home/Everything Else, The Elves of Fyn/I Believe in Fairies. . .
Next

Well, I’m probably leaving myself open to all sorts of criticism from the non-believers out there, but I think it’s time I admitted the truth, my truth anyway–fairies exist, they REALLY ARE REAL.

I know it sounds strange, but over the last six years, my sister Susan and I have been very fortunate to be able to communicate with some inhabitants of the fairy realm (or “faery” realm, as some like to spell it). At first, we thought, “Wow, we’re communicating with fairies? This is amazing; we should tell someone!” But as we thought about it, we decided that maybe telling the general public wouldn’t be such a good idea after all.

Recently though, in the last 3-4 years, the communication has changed from a sporadic interaction with random fairy residents to frequent contact with one particular group of fairy.  This latest group has a purpose in their communication, and the information that they have given us has been richly detailed and amazingly useful. Some of the topics they have covered include: who they are, what they want from us, how to use fairy magic on a human level, how to invite them into your life and connect with them, as well as some information about their customs, art, and artifacts. So now, with a considerable amount of information archived, we have come at last to the point where we–and they–feel that it is time to share it a little bit at a time and see how it goes.

Below, is an example of some of the artwork we have received intuitively from this last fairy group, the ones we now know as The Elves of Fyn.  It is one of many artworks and magical symbols that we have received over the last few years, and we look forward to sharing many more with you.  We hope that you will check in here from time to time to see what new information we have added and that you will enjoy this site whether you believe in fairies or just wish that you could.–Natalie Lynn 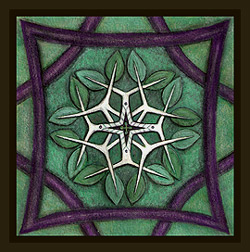 Update:  This was our first post, written in 2008.  Eleven years have passed since this was written and, during that time, we received more and more information from the elves and other beings from their realm. We had so much information that we started thinking about writing a book in 2016.  It has taken three years but finally, in 2019, our book Interviews from the Fairy Realm will be published.

Unfortunately, we had to close the comments on this post due to the sheer number of comments.