A Fairy Encounter – The Plastic Beetle

During a visit three or four years ago, my young nephew gave my daughter Katie a large black plastic beetle which was very realistic looking.  Why he gave it to her, I’m not sure–he probably thought it was cool and she’d appreciate it, which she definitely did.

After he left, she put it on a moulding above a stairway in our house, thinking it was funny that people might see it, think it was real, and be a bit creeped out by it.

Months went by, a year or so, I think.  One day, with company coming, I decided the joke was over and it was time to remove the beetle.

I asked Katie to remove the beetle from above the moulding and she happily agreed, thinking it had been a good joke but it was time for it to be over.  When she went to retrieve it, she couldn’t believe her eyes and we were all astonished to discover that the plastic beetle was gone and a real but dead beetle the exact same size and shape had been put in its place.

After I got over the surprise, I checked to see who had been responsible for the swap.  No one came forward to enjoy their clever joke.  In fact, everyone in the house was rather shocked and fairly squeamish about handling the real beetle.  A plastic beetle is one thing but a real, dead beetle of that size is another story.

I was at a complete loss to explain what had happened until it hit me–FAIRIES!  This is exactly the kind of thing they would do!  Here, we had the plastic beetle up there as a joke but they thought it would be much more amusing to turn the tables and have the joke be on us!  I imagine they got a good laugh out of it and I have to admit it was pretty funny and very clever, just like them. 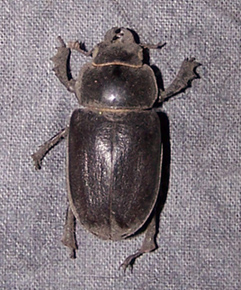 This is the real beetle we found in place of the original plastic beetle, almost 1 1/2 inches long.